Every time you blink, you teleport somewhere new. Can you take control of this curse, and find loopholes to use it in your favour? An open world puzzle where you learn the rules as you play.

Game made by JUSTCAMH, with music by Clockmaker. Made in 3 days for Ludum Dare 51

Listen to the soundtrack! 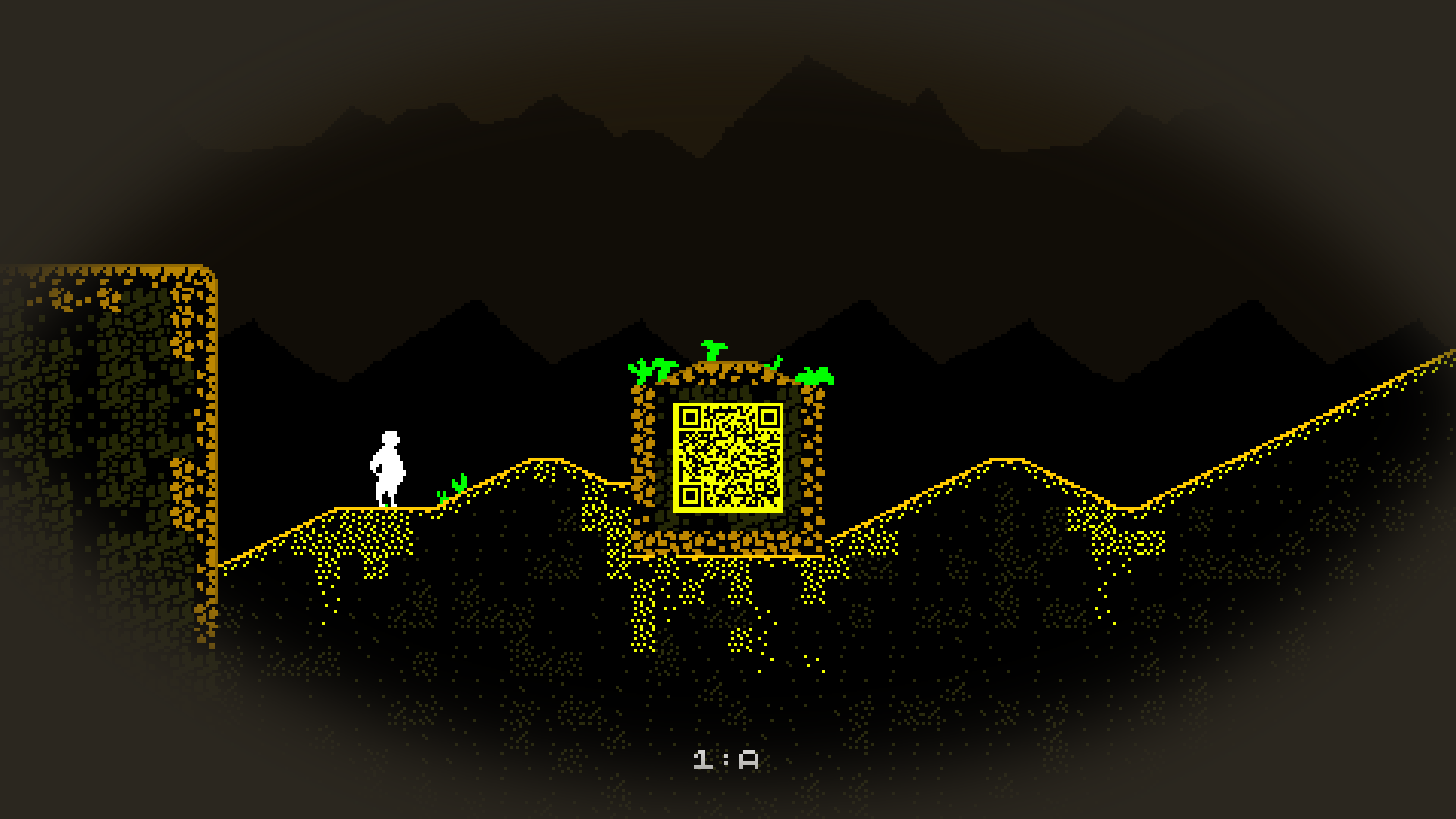 Nat the Chicken10 days ago

On the second screen, I tried to use an ad-infested free QR scanner I already had on my Android, and I had so much trouble getting it to work that I blinked and then the QR wasn't on screen anymore. Idk if that's intentional but it happened twice.

Then I teleported or fell into the water in screen 2D and now I can't get out by blinking or platforming, blinking didn't do anything and I apparently can't jump high/far enough.

Maybe I'll try again, the blinking is a cool mechanic, but it seems like there are bugs and the QR gimmick makes things very difficult. I guess you were trying to make the mechanical difficulty and time delay of using my phone part of the difficulty/frustration of the blinking, and I'm not sure I vibe with that in practice.

OK, after restarting I was able to make a little progress and better determine some of the mechanics. Seems like I got stuck because of a level design error or inconsistency in the movement code rather than a bug with a mechanic.

However, I'm now stuck in -1:B and frustrated because I can't tell what happens when I try to make the last jump in the middle, whether it's actually impossible due to movement issues or whether I just need to adjust something.

I'm playing in Firefox Linux (snap) on a laptop which runs Kubuntu 22.04.1 with a Core i5 CPU and integrated graphics. Just in case that's helpful for any reason regarding my possible inability to jump high enough.

I have a double jump.

Disregard my blathering I suppose.

Cool idea I guess, but I'm not about to go scanning random QR codes, regardless if it's just a game or not. QR codes can contain malicious code and links so without knowing exactly what it will do it just isn't worth it to me, sorry.

The qr codes are all text, not links. I see why you're worried, but it's like you're worried that "this .pdf file might have a virus on it"

I think this mechanic has potential, I'd pay for a full game with more "sub-mechanics" to figure out.

I am stuck and have no idea what to do.

Edit: This game is clever

Really creative and fun game! Love using QR codes as braille, and learning all the aspects of the blink mechanic was a treat. Thanks for making this!

Reply
HurricaneOf8733 days ago(+1)
I edited together a playthrough, complete with the QR code messages on screen, for those that just *couldn't*.
Reply
CuttsAndBruises35 days ago

Absolutely brilliant. Its fun and intriguing. I really liked the central mechanic and the QR code lore was compelling. 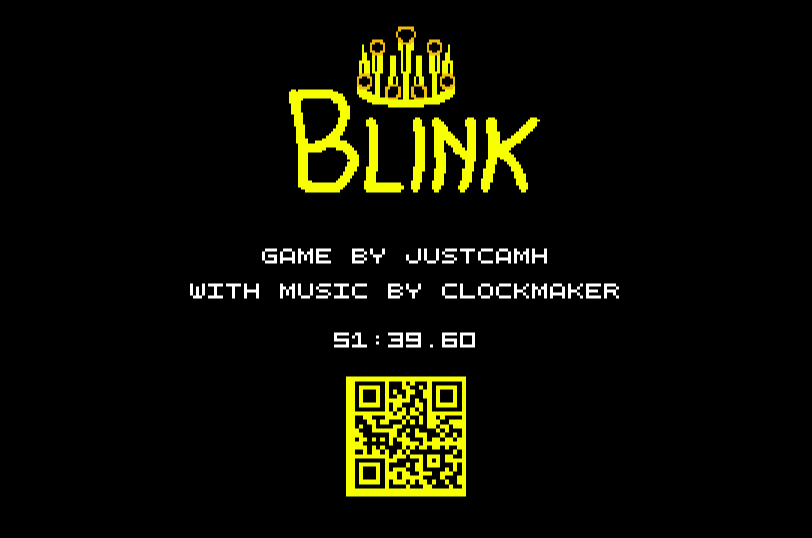 Reply
Nat the Chicken10 days ago

Yeah the same thing happened to me lol, luckily I realized after like 10 min or so

Does the game have multiple endings?  I assume not because of the time constraints, but the world-building made me really think there might be an alternative resolution. Particularly the room with the Fools.

This game uses the 10 second in a very interesting and fun way. Moving from one area to another just by blinking is only a fascinating way to traverse but also a way to show the player where the pieces of the crown might be. The QR codes are also a very interesting piece of tutorial and lore to the game. I tried my best but in the video I didnt manage to capture the QR code at the castle although I should have gotten it. Really fun to play and speedrun.

Still wondering if i found all the secrets lmao

This has quite the original puzzle mechanic! And you got a lot of leverage out of it. I found a handful of the platform-oriented rooms a bit annoying―it's one thing to fail at a test of reflexes, and another to fail because you can't see anything―but the room design in general was really clever.

I loved the scraps of lore, and the QR code element gave a cool delay to the information you gain that made it feel like it had more weight once you "decoded" it. One gimmick would have been enough, so I love that there are two and that they work so well together. Although I can see why other players found it annoying, particularly if you don't time things well enough for a screenshot before the code gets whisked away.

I'm not sure I really understood the ending, but that means I'll be thinking about it for a while longer and that's not at all a bad thing. Brilliant submission!

Good grief, that was brilliant! I'll admit I couldn't quite finish it myself, but I found a speedrun(!!) of it here — https://www.youtube.com/watch?20WrxC_QMQOfM (I made sure not to let it preview cuz it might be a spoiler) — that showed me the rest.

Brilliant use of QR codes, of learning how to play and to complete the game, and with such a magnificent use of the "every 10 seconds" theme. Plus I loved that you could just blink anytime to also just reset the timer, as a lot of the games I've played thus far don't allow you to choose to reset whenever you want.

To anyone looking for an easy way to scan QR codes (for some reason my camera app had a lot of trouble scanning these), on Windows you can use Win+Shift+S to copy it to your clipboard, then just paste it here:

To get there, you'll need to go from a room with a name starting with 3:<something>. Not spoiling the exact room, but blink around and you'll find a place you haven't beaten yet!

thanks for replying so quick! i found it, and beat the game (finally lol). super cool concept, and as pretty much everyone else has said, the qr codes are super original! the whole thing: the art, the music, the mechanics and the codes make for a game that really stands out from the rest. severely underrated. thanks again for the tip!

I had a great time with this! The concept was well executed. I thought the idea of being randomly teleported to anywhere in an open world would get annoying quickly, but it works really well! The use of QR Codes was interesting! The lore that was built throughout the game was pretty intriguing. Some details are just vague enough to leave it to the player’s imagination, which is a nice touch. Gameplay wise, the progression of figuring out the mechanics and how to use them felt great as well. Overall, I loved the experience! Great work!

Thanks so much for playing! I just wish apple’s camera app wasn’t so bad at scanning QR codes… But you did great solving all those puzzles!

Very original and innovative idea, and I loved how it gradually became clear what you needed to do without any specific instructions.  I liked the exploration aspect and the extra details here and there which gave the environment more flavor.  Getting the last thorn and reaching the forge were pretty frustrating though.  Maybe you could add more audio feedback to make up for the lack of tactile information.

I'm not sure I understood the point of the QR codes as opposed to just having text in the game world.  I ended up using Firefox's screenshot functionality along with the zbarimg command-line tool to decode the text, which felt like an unnecessary hassle.

Amazing, i finish in one hour

That was really good!

Any speedsters out there? 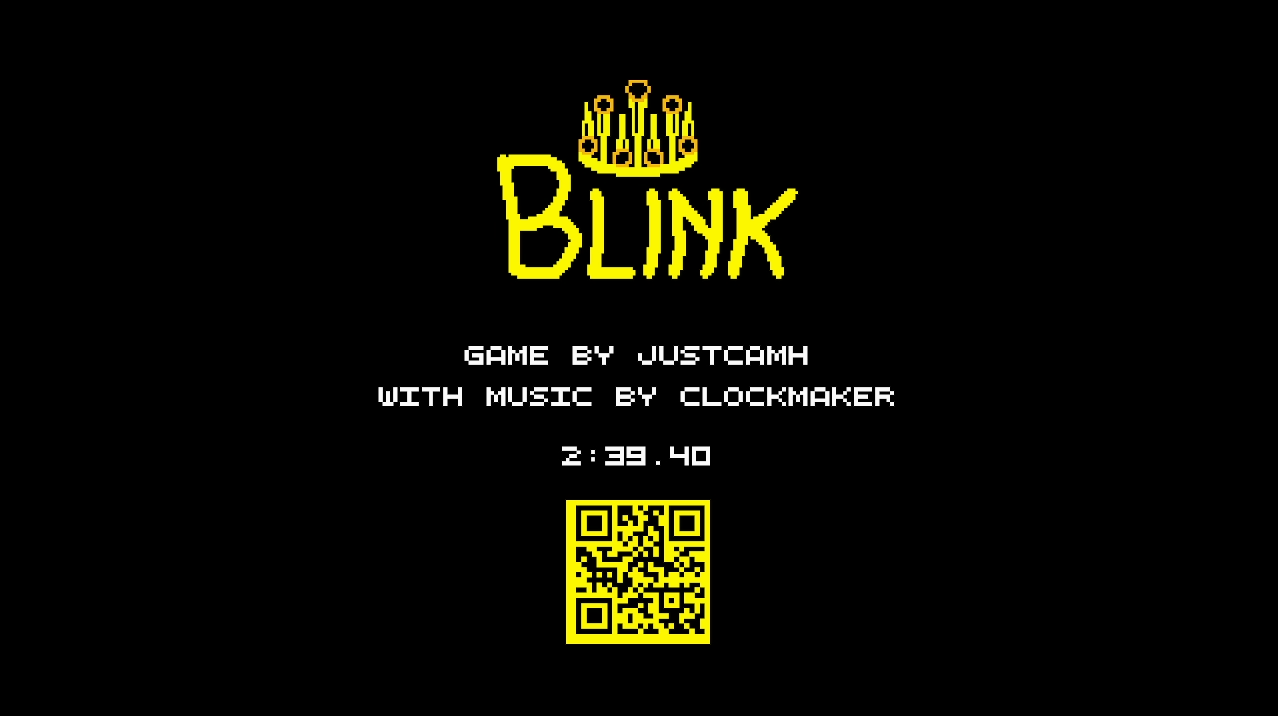 I enjoyed playing! I wonder if this world's inhabitants know about Sticky Keys.

That was really fun! Awesome job :D the QR mechanic was strange at first but I think it worked really well for giving a wordless environment while still conveying textual story

Small bug. It looks like you can softlock the game by running from 0-A to 1-A, and then running back to 0-A

Thanks, fixed that transition!

Can I get a gentle nudge in how to find the forge/mountains? I've gone just about everywhere I can think of, and I'm not even sure if I've even been to the mountains lol.

Look for a hell area you haven't entered, with similar particles at the entrance to the one you're familiar with.

Wow how did I never go down there, I only ever went over to the side room lmao. Thank you!

i don't get it - i've only found one area that ends where you fall a few times? can't find the forge. I've seen 2G but i have no way to get there? 5 mins later....omg nvm haha

stylish, mysterious, innovative. i love it

aand finished! an interesting experience from start to finish

Great presentation and the idea is interesting. The only thing that I personally don't like is the qr code part of the game.

What an absolutely fascinating game mechanic! Normally I don't like being thrown into the unknown while I'm trying to map out a Metroidvania, but I'm glad I stuck with this. Wow! This game was really clever! I loved all the QR messages too (providing useful hints and backstory,) but how did you honestly expect us to scan the one in screen -1:C as we're falling?! I ended up taking screen grabs on the QR code screens and then scanning them that way (I was seldom quick enough before I blinked otherwise.) Also, did you know you have two 2:B screens? Maybe the second one was supposed to be the missing 2:C? Well done on a great game, and the music fit perfectly too! Cheers! :)

I call this game the "ad revenue generator"!
Cause every fu cking qr code app out there gives you a sh itty 5second ad every 3 qr codes you scan! >:-(

Nevermind, I found an ads free qr code reader (even though it is slower a bit) and jsut beat the game.

Unless you have met and read certain specific signs , you'll just wonder around wondering what is even going on :-)

i have all the stuff, why cant i see the king?

You’ll need to visit the forge in the mountains with the seven fragments to make the full crown!

Hop out of the water, *then* close your eyes and walk right.  Unlike with an unforged crown, it doesn't work if you stay in the water.

im bad at games and this is fun but hard. i just need the last one

I can't "meet with the king" correctly. I stood at the castle entrance, closed my eyes, and walked to the right. I know that the statue somehow stops me from teleporting as long as I keep walking into it, but what else do I have to do? Memorize the pillars in the castle as I can jump over them perfectly?

EDIT: Oh, turns out that I need the whole crown. Now, if only I could find that last thorn...

The game was very confusing and frustrating in the beginning (probably as intended), but damn I grew love this.  Learning how this wacky world works piece by piece by trial and error feels amazing. Stumbling across secrets and connecting text-snippets while trying to understand what happened to this place, is very satisfying.  And I can't forget the visuals and music... they just really completed the experience. 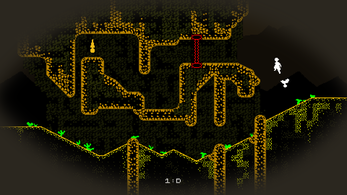 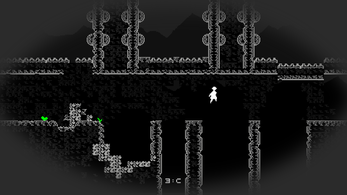 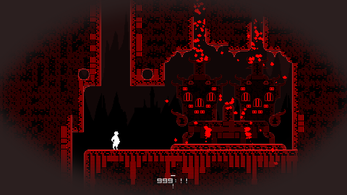